I’ve shared some mixed emotions following the WFLWR in Sunrise, Florida on May 5th, 2019. I finished 11th among the Sunrise field, covering 23.5 miles (38k) in 2h50min. This performance felt like a huge departure from my previous three WFLWR experiences. For reasons that I prefer not to term excuses, but rather circumstances, I wasn’t able to deliver on the performance that I know I am capable of. I’m OK with this, this is part of the process of “becoming” a runner. I have embraced running as a long term identity, and I continue to expound upon my relationship with running through each training block and race. 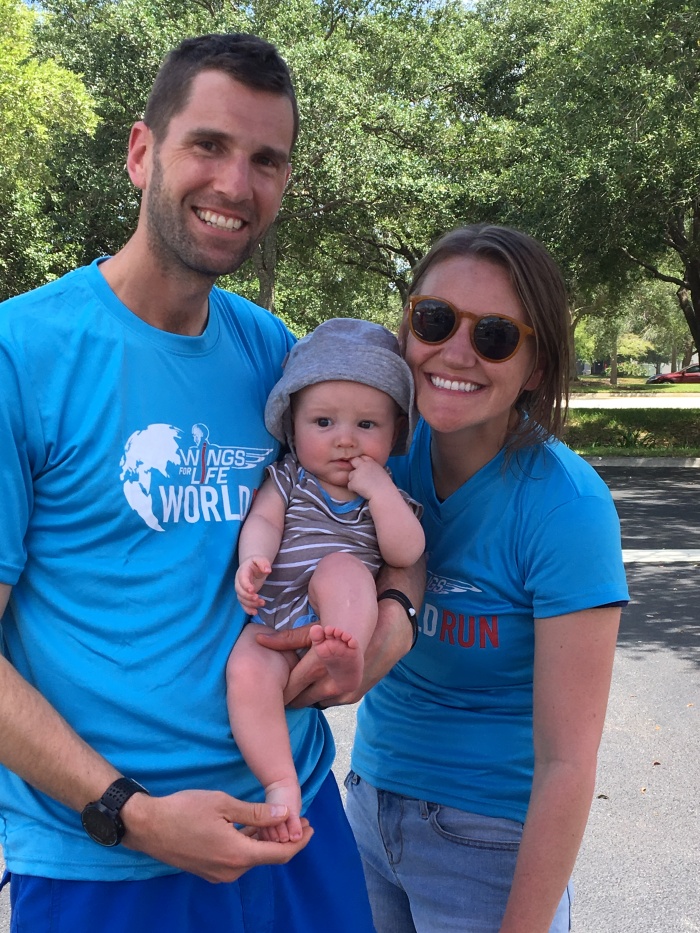 The race itself was hot and humid, already 80+ degrees at the 7AM start. I was competitive through the first 10K among the top 5 runners, and then severely dropped off at the half-marathon mark as the heat became oppressive as there was no shade to be found on the course. As I made it to mile 15.5, I tried to convince myself that I was halfway to my 50K (31 mile) goal. This didn’t have the effective spark to my spirit as I hoped, and in-turn debilitated my mentality. I allowed myself to walk. I have never done this in a race. Yes, I’ve walked during challenging climbs over gnarly terrain, but never in a race have I chosen to walk when I was physically able to run. After walking for a bit, the women’s race leader was closing in on me, including the entourage of support vehicles. After being leapfrogged by a motorbike cameraman, I was compelled to run again, hoping that he would take a picture of me 🙂 Any motivation helps! I continued on jogging, passed through an aid station where I filled up with Gatorade, then gave myself permission to walk again. That’s how it unfolded. I was passed by a few more competitors and gave them a cheer to keep on it! I got word that the catcher was a half a mile back, so I gave it one last push to pass the 38K marker. The catcher car passed and my race was over. Six months of buildup and anticipation, over in an instant.

Let’s do this! Julia, Devon, and I at the race start.

The month of March was filled with work travel and a lingering upper respiratory infection. With visits to DC, Atlanta, and Nashville, I did my best to stay active and got in some good running. The chill in DC put me on the treadmill for the first time in years, and I enjoyed it. Listening to music while running was a treat, but also being able to lock in my form and keep progressing my speed during 30-minute runs was a relief when compared the cold, slow run commutes that had become my M.O. After coughing for most of the month and not sleeping well due to said cough, I finally went to the doctor. I got an over the counter nasal spray to finally quell the junk in my sinus, and presto I was breathing and sleeping well. Just in time for…

The mysterious pain in my foot. This was a blessing in disguise and a practice in my athlete mentality. The entire month of April was funky due to this pain in the top of my left foot. The pain started immediately after a 3 hour cross country ski session and a short test run in new sneakers. I was pleased with my response to the pain. I chose to not attempt to defend my title in the Eisenhower Marathon. This was a tough one, so much so, that I considered driving 6 hours through the middle of the night, if I thought my foot would survive 26.2 miles. Instead, I took a few easy days, biked to work, and slowly reintroduced running by going barefoot on the Curve treadmill at work. I know who in their right mind says, I have foot pain, lets run barefoot? Well it worked! It was a clear sign that my running form had gotten sloppy (heel striking) and that there was room for strengthening my stride through barefoot running (ball of foot striking). I jumped at the chance to cross train with cycling, spinning, roller blading, running on the Curve, and running in Vibram 5-Fingers on the soccer fields near my home. All of these activities had me feeling good and confident that I wasn’t loosing fitness. Though after a few weeks, the pain still persisted, and I’d been reading about Navicular bone stress fractures, and had a bad feeling. I went to the foot doctor for affirmation. Thankfully, I was not at risk of a stress fracture, but rather I had anterior tibial insertional tendonitis in my left foot. The good news was, by the time I went to the doctor, it was already feeling much better, and the doc’s recommened path towards healing was everything that I’d been doing for the month prior.

Got to share some early K’s with Mikkel from Denmark.

I became addicted to sneakers. I ordered my first pair of Nike Zoom Fly’s on January 10th, then a second pair on January 24th, then after much consternation, I bought a third pair on February 25th. They are all the same shoe, Nike Zoom Fly with a carbon plate through the sole. These were on super sale at Finish Line, so I felt like a squirrel collecting my nuts for a years worth of running. The shoes fit great, and I put in over 500 miles among the first two pairs during this training block. After reflecting on my tendonitis and tendency to heel strike, I surmised that my feet & calves weren’t strong enough to handle the energy return of the carbon plate. I’m an engineer, give me a break. So my form got lazy, my left foot began to splay outward to compensate for lack of bend in my big toe, and I rolled through each step to make up for a lack of calf power. The month of April was spent strengthening toes and calves, and while I feel much better about my form, there is still a lot of strengthening to be done. I am actually super excited about this prospect. I felt that my running had plateaued, I was going through the motions, and unsure how to actually improve. Running barefoot on the Curve and on the grass made me feel again! I was sore, from running! That is the tell tale sign of improvement, right?

I wasn’t enjoying my relationship with Strava, so I changed it. The impulse, the twitch, the irrational goals. The Strava effect had become twofold. First, I was letting a number dictate my well being. Originally, I had set out to run about 10 hours per week. This equated to 75-90 miles. I thought this would allow my mind to let go of that weekly mileage tally, but it did not. I still checked routinely and did the math after each run to calculate what remained. This was not fulfilling, as every opportunity for activity I devoted to running, despite my preference to ride my bike, or go out for a blade, or do yoga. My thought was that these activities would just detract from the accumulation of weekly mileage. Second, the impulse to check the feed, the notifications, and the kudos, had become a burden. I didn’t like the distraction, so I made a change and kept all of my activities private. For about two months, every activity was hidden from the public eye. There would be no kudos to check and no comments to distract me. This helped immediately in reducing my urge to check for Strava notifications, especially while at work, and I will continue this practice. I still appreciate the Strava platform, as I like tracking how many miles I’ve put into my running shoes, and my weekly activity hours. Also, since racing the WFLWR, I have gone back and made every activity in this training cycle public. I’m not trying to hide anything from anyone, just need to keep myself sane on the day-to-day.

Missing the team camaraderie. I’ve made it this far without mention of the tiny human that popped into my life last November… MAX! Doi, Julia and I have been learning this thing called parenting over the last 6 months. Things have been fairly good for us, and we often refer to Max as our angel baby, but there are obvious exceptions to that rule, especially during the night time hours. Has this effected us, YES! Our sleep patterns are altered, our freedom/freetime has been drastically reduced, but every day we share magical moments of Max cooing at us, or reaching for our faces for a hug…. this makes all the sacrifice worth it. These new responsibilities of parenthood have not only prevented me from doing group training like PlayGldn and November Project, but also, Julia’s return to running has not gone as swiftly as she had hoped. Again this is OK. This is Life. Julia is still only 29 years old! She has soooo much running and racing ahead of her. I’m slightly older than her, so my window of opportunity is smaller, but I’m still playing the long game on running for health and enjoyment. I don’t particularly like running alone all the time, which is what happened during this block, so I’d like to get back into the group training, at least once per week. Also, I’m a bit empty when Julia is not running. We feed off of each others enthusiasm when it comes to running motivation, and I’ve definitely felt the dearth of vigor during her pregnancy and now post-partum. This is just where we are in our lives. 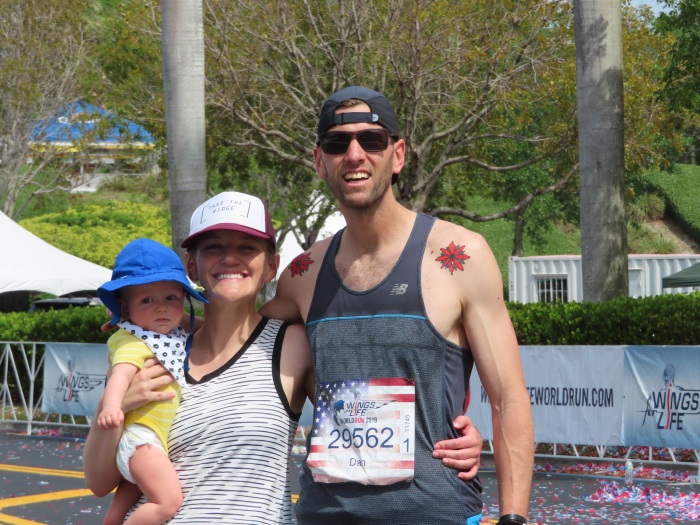 Reunited after the race!! Max would rather be in his air conditioned crib.

I’ve read a bunch of books this year, mostly because I switched over to digital books. Using my Samsung tablet, I can get through a chapter a night after Max goes to sleep. And I always have another book in the queue. Can you spot a theme in my reading preferences: 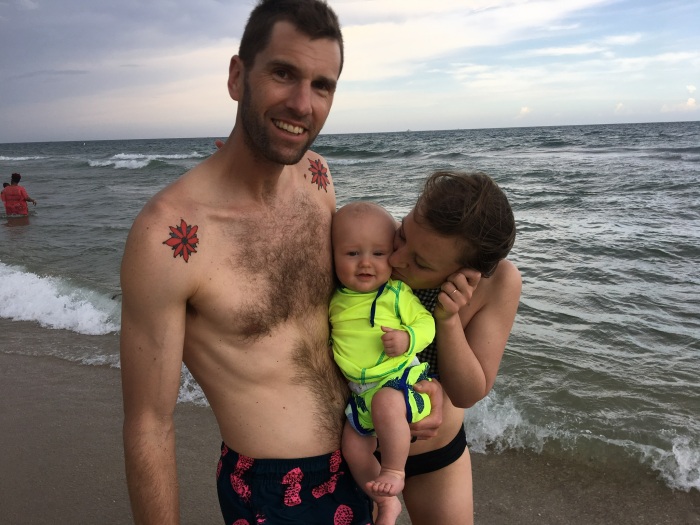 So whats next? I will continue to work on my running form with a mix of running on the Curve treadmill, grass fields, and with a particular focus on short & fast racing. I haven’t had many true racing opportunities since adopting an ultra mindset a few years ago. While my training is usually done alone, I’ve found most ultra races are done alone too. For most of my races, competitors are either far ahead or far behind me, so it’s not much different from my training runs. I miss the mental push of trailing someone in a 5K, or agonizing step-by-step from mile 10-13 of a half marathon. I yearn for the competitive jolt. What’s been preventing me from hopping in to shorter races is the expense. When you pay $100 for a marathon, paying $50 for a 10K doesn’t quite equate for of price per mile value. Though, I am excited to hop into Park Run races soon. These are free 5K races held at locations all around the world, every Saturday morning. I’ve been trying to participate in the series up in Boulder, but the timing just hasn’t workout out yet.

So that’s where things stand. I’m just moving with the rhythm of life and using this time to progress, improve, and become a better me.

The pursuit of a dream is a journey of transformation