I decided to combine my weekly recap with my race recap, so if you’re here just to read about how the race went, scroll down to the bottom. Spoiler alert: I ran 1:37:01. I’m immensely grateful for all of the support I received and I’m in total awe of Dan, so make sure to check out his post too!

Monday: Classic move… I set my alarm thinking I’d run in the morning then when it went off, I just closed it and kept sleeping. I ran a new loop in the sunshine after work. I went from our place to the Pace-Bells’ new home in Golden, past the Gravinas’, and then back home. 6.4 easy miles.

Tuesday: I wanted to do a workout, but I also knew I wanted to sleep in again. So I did. Then after work, I went out for my “quarters.” I went on the Clear Creek bike path along Highway 58 and the plan was to run around half marathon pace for the first .25 of each mile after the first one. I started running and was questioning myself “Is this how I hold my arms? Am I doing this right?” After a couple miles, I started to relax a little bit. This was pretty good for a race-week workout I think. I got in 6 miles at 7:46 pace.

Wednesday: I decided to take a rest day and…. sleep in again. My favorite. After work, I walked to the library.

Thursday: For PlayGldn, I wanted to take it easy on the hill and run about 5 miles. It was great! After 5, I just walked with Meg and took pics of the gang. I was so happy to see my friends!

Friday: I was itching to go to November Project but I also wanted to run a few miles. The workout was at Skyline Park and was all bodyweight exercises that I knew would make me sore. So, Robyn and I sneaked (interesting history of the word ‘snuck’ vs ‘sneaked’ here) out to run a few miles around downtown. We ran a little over 2 then joined back up with the group for a few suicide relays. Fun morning! But I felt pretty awkward and heavy running. This is typical of taper, but also we only ran for 2 miles – I need longer than that to warm up!

Even when tapering, I couldn’t let my relay team lose the race.

Saturday: I just wanted to run for about 20 minutes the day before the race. Shortly after waking up, I opened the door and felt the cool spring breeze and it was glorious and I couldn’t wait to get out. Dan asked if he could come with me; he wanted to do 3 miles, so I was convinced to go a little longer than 20 minutes. I didn’t wear a watch – just used my Strava app on my phone which was in a pocket. I felt comfortable and really enjoyed the quiet morning in Golden with my love. I came back and stretched for a little bit and took the rest of the day easy – I even fell asleep on the couch for a few minutes.

Earlier in the week, I texted Robyn that my number one goal was to not say the words, “it just wasn’t my day.” I’ve worked myself into that trap before mid-race, when my mind decides it’s over before my body does. I wasn’t going to let that happen. My time goal, which I’ve been very open about since I started training, was sub 1:35. I knew that this would take work, but thought it would be doable.

On Sunday, I woke up after a good night’s sleep and was just starting to get nervous. I ate a banana, half a bagel, drank about half a cup of coffee, and then sipped on Tailwind. We got to Littleton with no issues and met up with Tyler who had our bibs.

I’ve never warmed up for a half marathon before, but I knew it would be necessary in order to run as fast I was hoping to. Tyler and I set off for an easy 2.1 miles and made it back in time for me to take a final trip to the bathroom and drop off bags and say ‘hi’ and ‘good luck’ to friends. Before heading to the start, I ate 2 Clif shot blocks with a sip of water.

I had plans to start off slow – I wanted to be around 7:20 pace in the first few miles. I’ve never negative split a race before, but I really wanted to give it a try! In the first mile that wound through Littleton, I let so many people go ahead of me. I felt like I was relaxed and I didn’t try to hang with anyone. I thought I was doing a good job but then my watch clicked 6:53. Crap. I reigned it in and then my next three miles were each at a 7:11 pace. That’s better, still not as slow as I planned, but really consistent. Meaghan and Kevin were on their bikes cheering along the course and I saw them for the first time at mile 4. I was feeling pretty good at that point and I loved seeing them! Their cheers gave me a boost that helped me run the next mile in 7:05. After I saw that pace, I decided I need to pull back a little and ran mile 6 in 7:22. That was slower than my goal pace, but overall I was ahead of time. My 7th mile was in 7:12. I made it through 7 in 50:05, which is 7:09 average pace. That is what we did our 8 mile tempo in a few weeks ago and I thought it was a reasonable goal, so this felt okay.

This is when things start to go bad. It was around mile 7 when I realized I hadn’t taken in any calories. I had a few sips of water at each of the aid stations and a pack of Honey Stinger chews in my pocket that I hadn’t opened. I pulled out 2 of them and choked them down a little after mile 7. Two chews only equates to about 30 calories though. My energy was starting to fade. Looking back, I think I should have forced the rest of the pack down at this point, but I didn’t. I just ignored the fact that I was running out of gas. Dumb!

Fast-forward to the finish.

I knew Robyn was going to be at mile 8 and I was excited to see her – no one knows my running better than she does. She was ready to go and to push me and when we first met up I said I was feeling “pretty good.” Pretty good turned into terrible very quickly. I ran mile 8 in 7:20 and mile 9 in 7:19. These are still respectable paces and if I had kept this up, I could have met my goal. But then around mile 10, I started to feel like I was going to vomit. I’ve never felt like this during a race – normally it’s the other type of stomach issues! Robyn had a bottle of Tailwind with her and I took a few sips but it made me feel worse. I think it was just too late. She kept offering me drinks, which, again in hindsight, I should have taken but I just grunted in response to her offers. For a few miles, I was dry heaving and considered stopping to see if I could get anything out. I knew she wouldn’t have let me, though. In the last few miles, it was like I wasn’t even in my body. I couldn’t respond to anything Robyn was saying and it took everything to keep moving and not stop and curl up in a ball on the side of the course. I totally faked it for the November Project cheer station at mile 10, though – if nothing else, I wanted to look like I was having a good time for a few seconds! Mile 10: 7:28, mile 11: 7:43, mile 12: 8:01, mile 13: 8:08, the last .1: 6:40 pace.

Ugliest half marathon splits ever? I finished in 1:37:01 which is SO annoying. My previous PR was 1:37:02 so I technically beat my time by 1 second, but I don’t really feel like celebrating that 1 second. 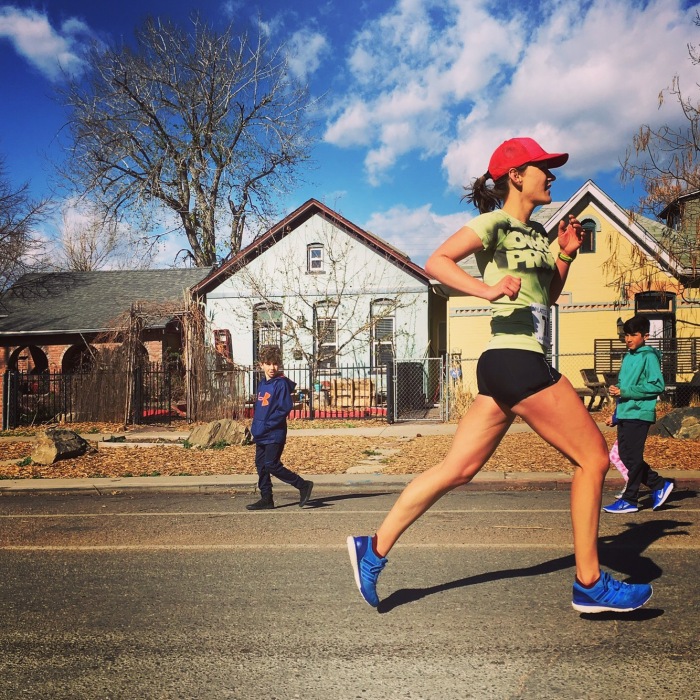 When people yell “kick” you  pick it up no matter how bad you feel. PC: Dan.

If you look at my splits, you’d probably say that I started out way too fast and hit the wall hard. That’s fairly accurate. But I truly think that if I was fueling properly, I could have run a a minute or two faster in the second half of the race and met my goal, or at least gotten close! Another thing that I think contributed to my race was issues with my breathing. Even during our slow warm-up, I felt like I couldn’t get a deep breath. I thought maybe it was just nerves, but the whole day, I couldn’t get my breathing under control. I’ve been dealing with some spring allergies and I’m thinking it had an effect.

Always my favorite sight at the end of a race.

After the race, we ate some food at the finish line party, hung out with friends, and I got to watch Dan get his 2nd place award! My stomach was still pretty wonky, but overall, I felt okay. No blisters or chafing, I wasn’t dying to take my shoes off, and my legs felt alright. 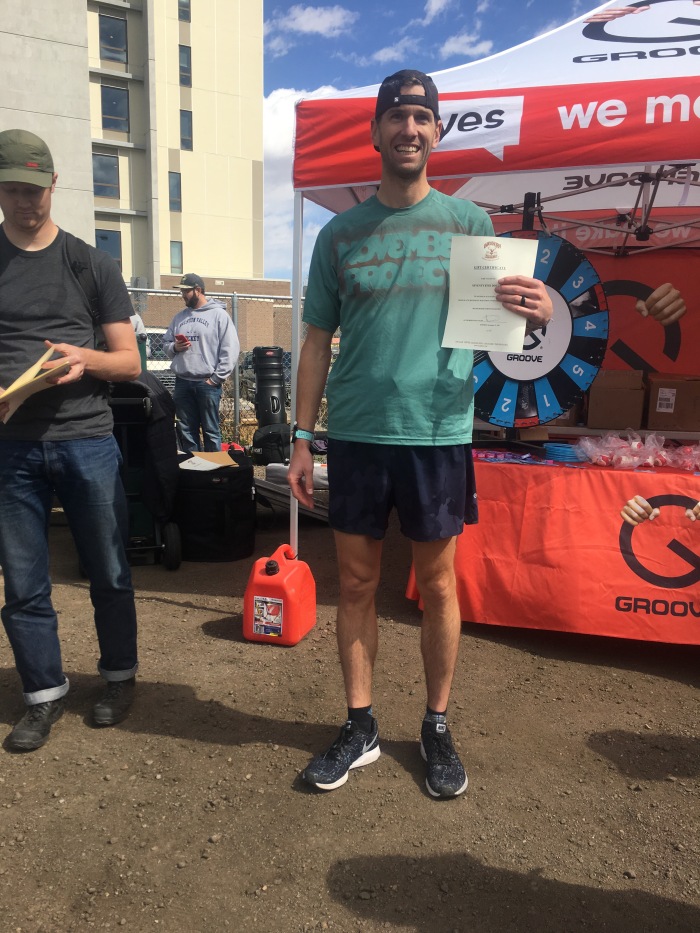 He won us a free dinner!

We then got a ride back to Littleton and Dan and I went to the ultra hip Spur Coffee a few blocks away where I had a delicious Chai tea latte with a donut. We then met up with Pace and Mike Bell to celebrate their one year anniversary at Cannonball! We were actually at their first date there a year ago, so it only felt right. I had a 10oz pour there.

We got back home and I was hesitant to shower, because I felt like I could maybe go run a little more. I rolled out my legs and then headed out with no plans or expectations except to go up South Table. Though my stomach was pretty angry at me, the rest of my body felt relaxed. I went a total of 5 miles which put me at 20.3 miles for the day. I think I needed that run to prove that I’m better than my race indicated. Also, it was a good mental shift – there’s no time to dwell on this race not going how I wanted. I’ve got Dirty 30 to train for!

Happy place. Back on the trails.

High:  All of the amazing support from the NP5280 crew, the Gravinas, Robyn, everyone. From comments on Instagram to smiles from friendly strangers and text messages, I was just overwhelmed with how kind people were to me. Dan was especially sweet, too – even with his great personal accomplishments, he is always focused on the team.

Max’s melt-your-heart moment, he decided it was time to deliver the Mother’s Day cards he crafted with hugs, kisses, and I Love Yous for my mom, my sis, and Julia. So fortunate that this lover boy has such amazing women in his life. #happymothersday